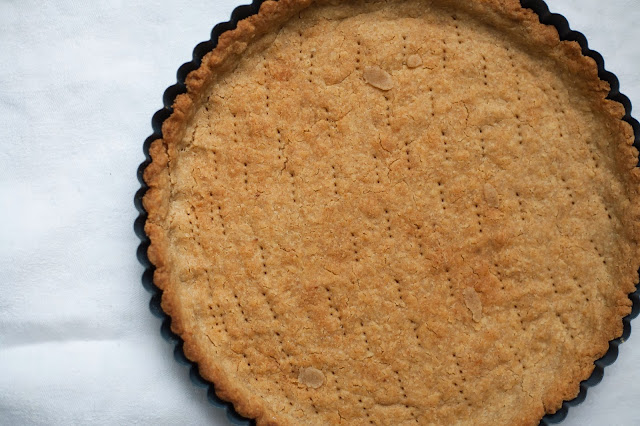 This tart crust was the most delicious crust I've made, and the easiest.  I'll forever use this recipe.  Ready for this?  Heat the over at 410 degrees.  In an oven safe bowl place 90 g of unsalted butter chopped up, 3 tablespoons of water, 1 tablespoon of sugar, 1 tablespoon of canola oil, big pinch of salt.  Put the bowl in the oven for about 15 minutes, until everything is melted and the edge of the liquid starts to brown.  Carefully take it out of the oven (carefully, it may spatter), and add 1 rounded cup of flour.  Stir until all the ingredients are mixed and it sits together in a ball, and dump the dough into a pie pan and smooth it out flat with a spatula.  Wait a few minutes till it's cool enough to touch, and spread the dough out with your hands until it's even, all the way up the sides.  Prick it everywhere with a fork, and place it back in the oven for 15 minutes until golden brown.  Voila.  Simple. 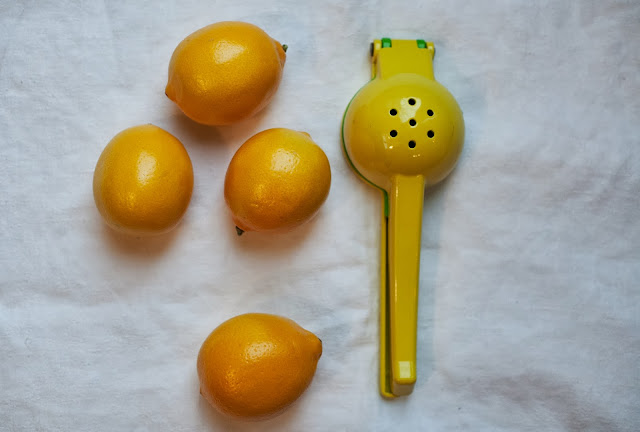 You'll need about 6 meyer lemons to squeeze a cup of lemon juice...  but first zest two of the lemons and place aside. 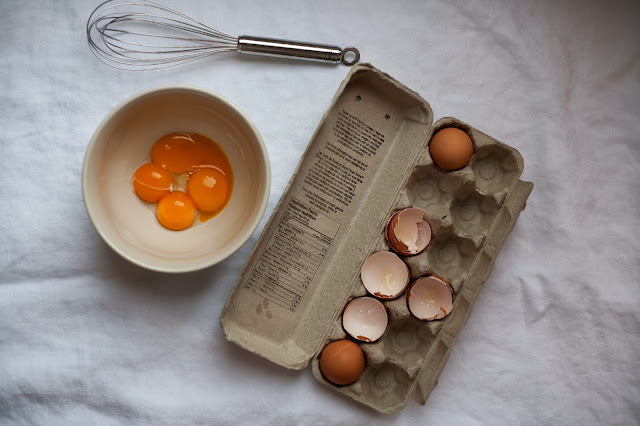 Lower the oven temp to 350 degrees.
Crack 4 eggs into a small bowl, add an additional 4 yolks, and whisk together.
In a large sauce pan add 1 cup of meyer lemon juice, the zest of two lemons, 130 g of sugar, and 85 g of chopped up butter.  Heat on low until the butter has melted.  Pour some of the liquid into the bowl of eggs, whisking them together to warm the eggs up.  Add the egg mixture back into the pan stirring constantly so the eggs don't cook.  Stir over low heat until it thickens and almost starts to bubble around the edges. 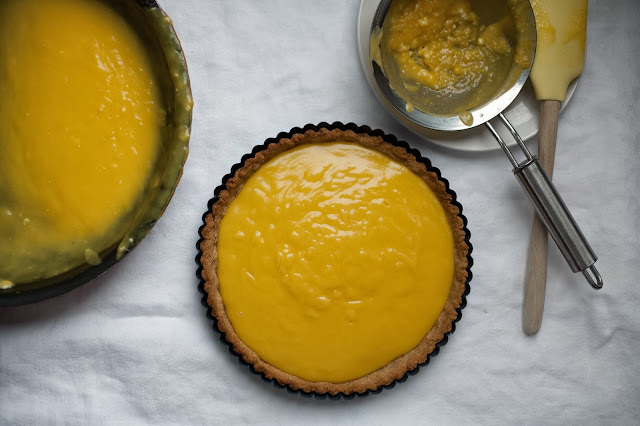 Pour the lemon curd through a strainer into the tart shell.  You'll need to push it through with a spatula.  Smooth the top and pop it in the oven for 7-10 minutes to set the curd. 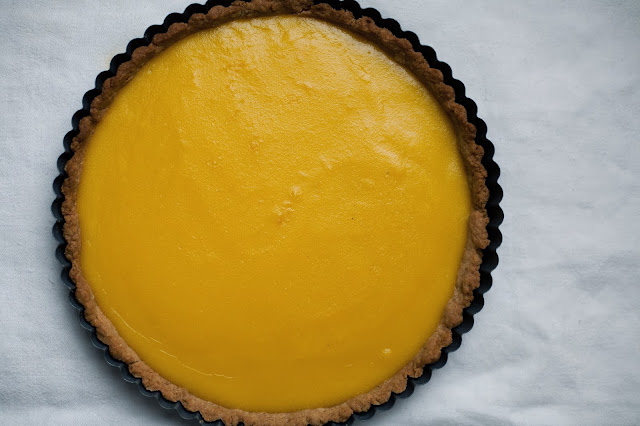 Let it cool at room temp or in a cold room for hours before serving.  The waiting is painful but necessary...  Open a bottle of desert wine that will compliment the sweetness and delicate tartness. 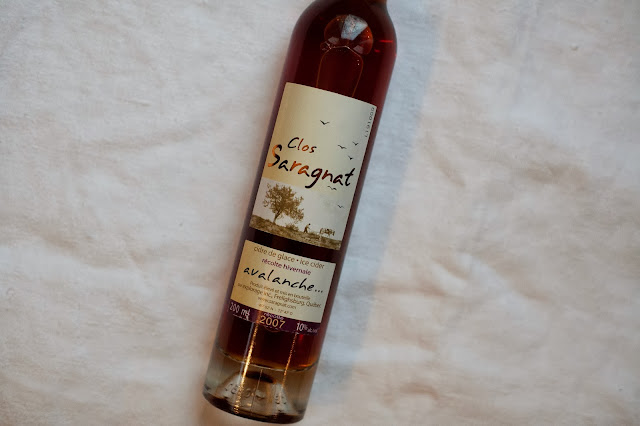 
With a sweet dessert, you need to pair it with a wine that is even sweeter then the food itself. Luckily, I had an interesting bottle of Ice Cider that a friend had given me a few years ago. This was a perfect opportunity to pop it open. Dessert wines do always get better with age, but I recommend opening them every chance you get. We live in a region that makes some of the best Ice Wines & Ice Ciders in the world, and we seldom serve them at our tables. That is something I hope begins to chance in Ontario.
This ice cider is made in Quebec and comes from a blend of 4 different types of apples that are harvested late in the winter. Just like the grapes for ice wine.The cider smells like delicious apple pie with Christmas spices. It has a beautiful mouth feel with a great balancing acidity that washes all the sweetness away. The finish is long and harmonious. A really great dessert wine/cider. Unfortunately, you can’t find this in the LCBO, but you can buy it at SAQ shops in Quebec for Just under $30/.

Posted by ashley and nicholas at 4:21 PM No comments:

We roasted a chicken, it happens many weekends in this house.  We roast the chicken, roast all kinds of veggies and are sure to make a soup of some sort out of chicken bone broth.  It's a cold weather tradition.
This time, we grabbed inspiration from the Ottolenghi boys.  I met them at a cooking demo and book signing with Chatelaine Magazine and have been excited to try a few things with sumac all over them.  Their love and affection for sumac was so much so that I went out and bought a big bottle. 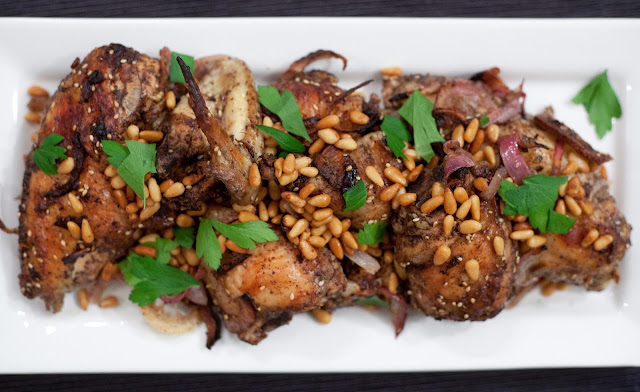 1 big organic chicken chopped into pieces, and mix the peices in a bowl with 2 thinly sliced red onions, 2 crushed garlic cloves, a couple tablespoons of olive oil, 1.5 tsp of all spice, 1 tsp cinnamon, 1 tablespoon of sumac, 1 lemon thinly sliced, and 1 cup of stock or water.  Let this marinate in the fridge for a few hours, even overnight if you want.
Arrange the chicken (and everything else in the bowl) onto a baking sheet, skin side up.  Sprinkle with 2 big tablespoons of Zatar.  Put in the oven at 400 degrees for 30-40 minutes (until chicken is cooked through).
While the chicken is in the over, melt 4 teaspoons of butter in a frying pan and add 4 big spoonfuls of pine nuts.  Roast the nuts, stirring constantly, until they are golden brown.  Dump them in a bowl lined with paper towel to absorb extra butter while you wait for the chicken to be done.
Plate the chicken with all the goodness also in the pan, and top with toasted pine nuts and a handful of torn parsley. 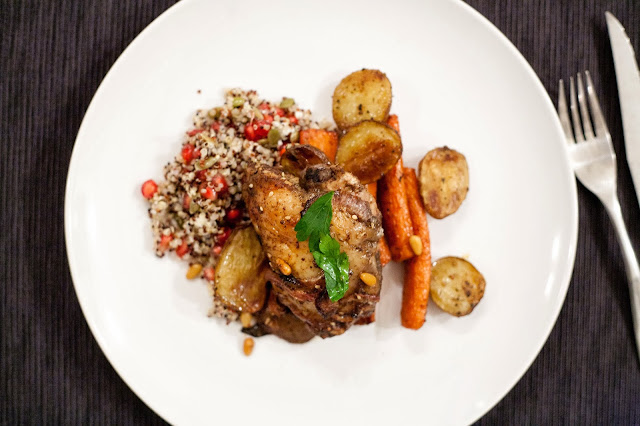 We roasted some carrots and potatoes with honey and sumac as a side, and did a delicious salad with 1 cup of quinoa (we mixed black and white), 1 pomegranate, a handful of feta and a handful of raw pumpkin seeds, drizzled with olive oil, squeezed with the juice of half a lemon, and also a sprinkle of lemony delicious sumac.
You won't regret buying a bottle of sumac, I promise.  Nor will you regret roasting anything with sumac, especially a big old organic chicken for sunday supper. 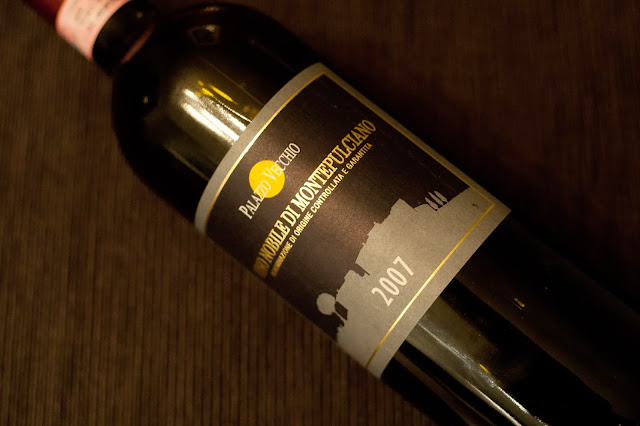 PALAZZO VECHIO VINO NOBILE DI MONTEPULCIANO 2007
This Tuscan wine was a present from some good friends a few months ago. It's been in our kitchen cellar and I've been eager to pop it for a while. It is a Sangiovese based blend that is required to age in oak barrels for 2 years (three years would make it a Riserva.)

This Tuscan wine (Vino Nobile Di Montepulciano) is often confused with another wine from a different region in Italy called Montepulciano d'Abruzzo, which is a red wine made from the Montepulciano grape in the Abruzzo region of east-central Italy.
Leave it up to the Italians to make this wine world even more confusing than it already is.
Regardless of its namesake, requirements or appellation control, this is a great wine for a dish with such aromatic spices. The wine is filled with red berry fruits, spices, lemon, minerals and flowers. It also has some nice chewy tannins that make it drink above its class. This one is available in the LCBO.
VINTAGES #348532 | 750 mL bottle  Price $ 23.95
bon appetit.
dinner is served.
Posted by ashley and nicholas at 8:52 AM No comments:

ashley and nicholas
Toronto, Ontario, Canada
nick, the wine guy. ashley, the social worker (and photographer). nick loves to cook. ashley loves cook books. nick loves to eat (and drink). ashley loves to drink (and eat). nick, lover of meat and offal. ashley, prefers mostly vegetables (and bacon and salami, doesn't everyone?). together, we balance out with perfection :) we almost always end up with delicious food and wine. please enjoy our kitchen adventures...

Our Favourite Blogs to Browse, Food and Wine